The Treasury's ambitious - and divisive - Growth Plan 2022 set out the largest fiscal overhaul for Britain in half a century and a two-part energy policy to curb inflation and shield the economy from volatile wholesale gas and electricity prices.

Kwarteng is betting on an expansion of the supply-side of the economy to stimulate business investment and growth through sweeping household and corporate tax cuts and deregulation to boost growth and stimulate investment. It was dubbed a "mini-budget", but, in fact, these fiscal policies have far-reaching near and long- term implications for the UK economy and public finances. The impacts for UK corporates include lower taxes, but higher borrowing costs with implications for lending and refinancing liquidity and asset values. Last week, we previewed the implications of the government's energy stimulus package for the refinancing market.

In the first of the two-part energy stimulus package, Kwarteng announced the Energy Bill Relief Scheme (EBRS). The scheme, initially for six months, is designed to insulate all UK households and businesses from volatile wholesale gas and electricity prices, which creates "real risks" to otherwise viable energy firms.

Separately, the Energy Markets Financing Scheme (EMFS), delivered via the Bank of England (BoE), will provide a 100% government guarantee for commercial banks to extend emergency liquidity to otherwise viable UK energy firms struggling from high and volatile energy prices. The scheme will open to applications on 17 October. The BoE said the EMFS will ensure that "energy firms can continue to operate and manage risk in a cost-effective way in the face of unprecedented volatility" and reduce energy costs to businesses and consumers.

Kwarteng confirmed that the Treasury's energy package is forecast to cost the taxpayer around £60 billion for the initial six-month period, based on recent prices. "The heavy price of inaction would have been far greater than the cost of these schemes," the Chancellor told the House of Commons. The government has also committed to direct negotiations with major gas producers and electricity generators to bring down wholesale prices. 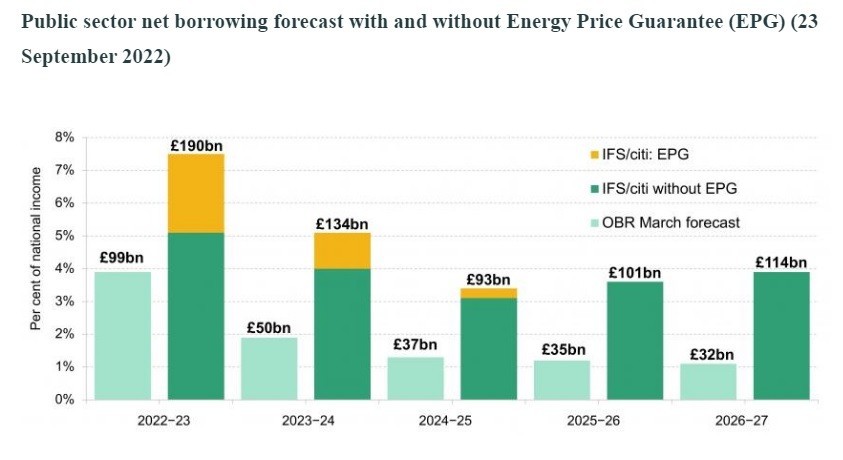 The Treasury plans to publish a Medium-Term Fiscal Plan "in due course", setting out its responsible fiscal approach including a plan to reduce debt as a percentage of GDP over the medium term. According to the Office for Budget Responsibility (OBR), public sector net debt (PSND) was 96.6% of GDP in August 2022, up 1.9% of GDP on a year earlier, and 1.1% of GDP above its March 2022 forecast. Kwarteng said consensus amongst independent forecasters imply the government's energy plan will reduce peak inflation by around five percentage points.

The chancellor set out the largest tax cuts for Britain since in 1972, decreasing tax levies on employees and companies worth around £45 billion, in an effort to boost sluggish growth rate to 2.5% over the medium term.

Kwarteng says he wants to turn "the vicious cycle of stagnation into a virtuous cycle of growth" through an expansion of the supply side of the economy. Tax incentives and deregulation, he said, "will deliver higher wages, greater opportunities, and crucially, fund public services, now and into the future".

Markets immediate response the Treasury's Growth Plan 2022 was unequivocal. A sharp sell-off in the pound coincided with a precipitous surge in gilt yields. Sterling slumped to $1.09 last Friday, the lowest level since 1985, while two-year gilt yields spiked 40 basis points to 3.95% - compared with 0.4% 12 months ago. Borrowing costs on five-year gilts jumped more than 50 basis points, the highest single day spike for 30 years, according to Bloomberg data. Consequently, the cost to the taxpayer of Kwarteng's tax cuts and emergency energy subsidies increased immediately as they were announced.

In overnight Asian markets early Monday, the pound fell to an all-time low against the dollar at $1.03 before it regained some ground to about $1.05 dollars, after the Chancellor doubled down on tax cuts over the weekend. In an interview with the BBC, Kwarteng said there was "more to come" on tax cuts.

Investors are sceptical of how the British government will fund the radical stimulus programme at a time when the UK's public debt remains historically elevated post-pandemic and the BoE has just pivoted from a buyer to a seller of bonds. Last Thursday, the day before the mini-budget, the OBR reported £9 billion higher than forecast interest costs on government debt, reflecting surging RPI inflation, which averaged 11.8% in the first five months of this financial year. The above target debt interest costs underscores market concerns as to the sustainability of the Treasury's borrowing-financed growth plan.

Traders priced in another jumbo-sized 100 basis points of additional rate hikes by the BoE by its 3 November meeting - double the size of the move announced 24 hours previously (22 September) that took the Base Rate to 2.25%. Some even speculated that an imminent BoE inter-meeting rate hike was possible. The plummeting pound and surging bond yields are indicative that Base Rate is too low to support future government debt issuance in the context of spiraling debt servicing costs in the current interest rate environment.

Markets have decided that "Kwarteng's tax cuts will lead to higher interest rates and that a deterioration in the public finances will undermine the UK's long-term growth prospects", said Paul Dales, Chief UK Economist at Capital Economics. In addition, Dales said the impact of supply side policies are "relatively small" which is why "markets have concluded that the result is likely to be higher inflation... rather than a sustained period of much faster GDP growth."

Economists suggest if real GDP growth comes in below the government's target of 2.5%,, while inflation and interest rates both remain higher for longer, the greater the concern is for the UK's public finances as well as borrowing costs for UK corporates. "Injecting demand into this high-inflation economy leaves the government pulling in the exact opposite direction to the Bank of England, who are likely to raise rates in response", said Paul Johnson, Director at the IFS.  The  research  institute  now  forecasts borrowing will be over £110 billion by 2026-27, or 3.9% of GDP, more than £80 billion higher than the £32 billion forecast by the OBR in March.

Johnson added: "It is possible that economic growth will be higher than expected, either through luck or through concerted policy reforms across government. But on current policies it is more likely that, at some point, today's tax cuts will need to be paid for by future tax rises or spending cuts."