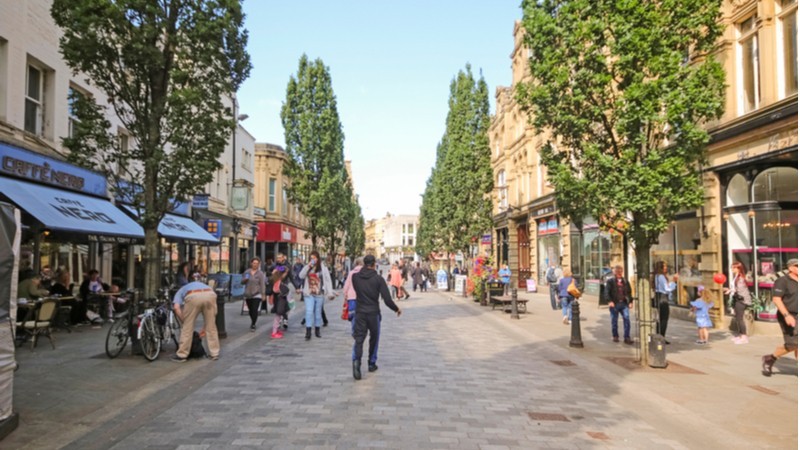 Downside risks for the UK retail sector continue to mount as we head into the autumn. A surging Delta variant threatens the momentum of recovery in the economy and consumer spending, while government fiscal support policies are soon to end – notably the furlough scheme and business rates relief. These risks dampen the outlook for the retail sector as a whole, and the stability of individual retailers both large and small.

On the surface, the picture looks to be brightening. UK GDP climbed 4.8% in Q2, compared to the previous quarter. GDP was boosted by stronger than expected consumer spending, up 7.3%, compared to a 4.6% decline in Q1, supported by eased lockdown restrictions and high household savings. The UK economy is now just 4.4% below its Q4 2019 pre-pandemic peak. Within the retail sector rent collection rates have improved over the year, aligned to the economy reopening.

However, risks to the economy and retail sector are significant. New virus cases continue to trend upwards across the UK, up 13.5% in the week to 22 August, although the hospitalisation rate continues to climb at a slower pace (6.6%). At the same time the virus testing rate across the UK is slowing, which reduces the visibility of the scale of the Delta wave. While it is far from certain that the Delta variant will force the government into new lockdowns, it would be prudent for retailers and landlords to plan for such a scenario. At the very least, further trading disruption is likely over the coming winter with households likely to stick with a preference for online spending. Even without renewed formal restrictions, these changes in consumer behaviour may affect high street and shopping centre footfall. Also, the likely necessity for vaccine boosters may add to a slowing recovery.

After 18 months of pandemic-era trading, many retailers are saddled with over-leveraged balance sheets, while revenues remain significantly below pre-pandemic averages. Lifted restrictions for non-essential retail was not enough for many retailers, for example, CBD retailers have continued to suffer from home working, and this has left many unable to pay rent. Across the commercial property sector as a whole, unpaid rent climbed to around £6.4 billion since the onset of lockdown restrictions in March 2020, according to Remit Consulting. This arrears bill will unlikely unwind in the near term after the government extended the eviction moratorium for non-payment of rent by nine months to next March.

Ultimately, the policy leaves the burden of pain-sharing between retailers, landlords and lenders for the market to resolve. It exacerbates already strained commercial relations all round: landlords with retailers and banks with landlords. For example, Hammerson recently described some retail businesses as “openly ignoring their rental obligations when they have the means to pay” in its half-year results. Separately, large retailers have voiced concern that the return to pre-Covid-19 business rates presents a threat to their future store footprint and have repeated calls for reform of the business rates system.

Much depends on the trajectory of the Delta variant from here – it will impact the outlook for the economy and, in turn, the prospects for retailers and potential future pandemic policies. In an adverse scenario, where a fourth wave forces new restrictions on economic activity, retailers’ trading revenues will suffer, and landlords’ assets will devalue. In turn, this may result in loan covenant breaches which may present a refinancing risk. Indeed, we are starting to see cases of banks take a hands-on approach to loan book risk management by asking retail landlords to run lease restructuring deals with tenants past them for approval. At the same time, banks are challenged by limited bandwidth, which can prohibit smaller landlords from getting necessary refinancings. Landlords of retails units carrying sub-performing loans are,  therefore, at risk of unsuccessful refinancing renegotiations – in which case, the options typically include:

Banks’ decisions on when to enforce over defaulted loans is a balance between reputational concerns and lenders’ macro view on where the retail property sector might be heading. If any of these issues relate to your business or a portfolio company and you would like to discuss your options further, please get in touch with one of our team.